Extreme sleepiness during the day is a common symptom of Alzheimer’s disease, but what causes it? We now have a response thanks to new research.

And after a good night’s sleep, many people with Alzheimer’s disease have a tendency to sleep a lot during the day.

Researchers believe that looking at daytime napping habits may help predict the development of Alzheimer’s disease, based on associations between chronic sleepiness and neurodegenerative conditions.

But it’s also unclear why people with this disorder feel the need to sleep so much.

Researchers from the University of California, San Francisco (UCSF) and other institutions have discovered that people with Alzheimer’s disease lose a significant number of brain cells in areas of the brain responsible for keeping us awake.

The results, published in the journal Alzheimer’s & Dementia, also show that an excess of tau protein causes these changes in the brain.

“Our work shows definitive evidence that the brain areas promoting wakefulness degenerate due to accumulation of tau — not amyloid protein [another protein that can become toxic in Alzheimer’s disease] — from the very earliest stages of the disease,” explains senior author Dr. Lea Grinberg.

The researchers discovered that, when compared to healthy brains, Alzheimer’s patients had high levels of tau in three main regions for keeping awake: the locus coeruleus, the lateral hypothalamic lobe, and the tuberomammillary nucleus. Not only that, but 75 percent of the neurons in these areas had died. 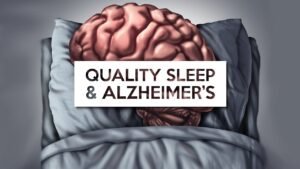 The researchers then performed a postmortem study of brain samples from seven individuals with progressive supranuclear palsy and corticobasal disease in order to gain more insight. There are two types of dementia that are distinguished by the overabundance of tau protein.

The scientists found no evidence of the same loss of neurons in areas associated with states of wakefulness in these samples, suggesting that this disruptive loss is limited to Alzheimer’s disease.

“It seems that the wakefulness-promoting network is particularly vulnerable in Alzheimer’s disease. Understanding why this is the case is something we need to follow up in future research,” says Oh. Dr. Grinberg and colleagues previously discovered evidence that tau protein could have a direct effect on Alzheimer’s disease brain degeneration. The researchers discovered that people who died with elevated levels of tau in their brain stem — a sign of early-stage Alzheimer’s disease — have started to experience mood swings and sleep issues.

Dr. Grinberg mentions that “Our new evidence for tau-linked degeneration of the brain’s wakefulness centers provides a compelling neurobiological explanation for those findings,” says

“It suggests we need to be much more focused on understanding the early stages of tau accumulation in these brain areas in our ongoing search for Alzheimer’s treatments,” she adds.

If you have a loved one in the Chicago area that has recently been diagnosed with Alzheimer’s, you may be concerned about how to manage the care they receive while balancing your own work and community responsibilities.

Right Choice Home Care in Chicago is one company here to help! We offer quality Alzheimer’s home care services to help your loved one’s age gracefully in the comfort and safety of their own family homes.